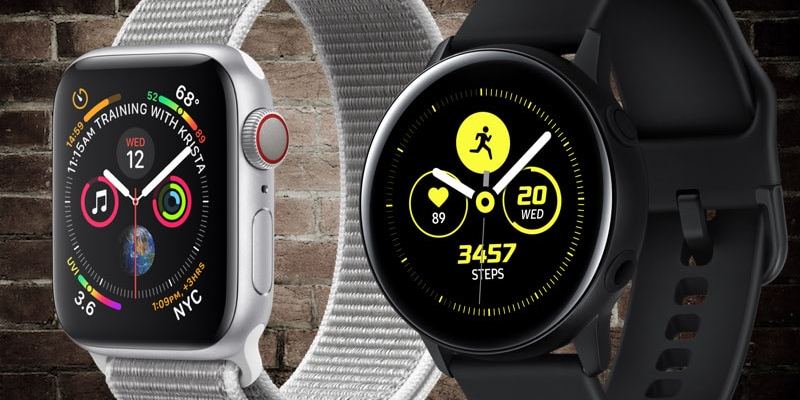 So one thing you should know about me is that I’ve been working in the IT Tech field for 16 years  now.  Which means its only natural that I use my technical mind to do some comparisons between Fitness technology. Later on I’ll also do a review between Fitness apps as well so that you can hear it from me on what I think of each one.  The Tech for Fitness has been improving more and more over the years. As a Techie, I really enjoy testing things out and seeing what gadgets and apps are being innovative enough to spark my interest for my fitness.

I used to have an Apple Watch Series 5 before I switched to the Samsung world.  Now I have a Samsung Galaxy Watch Active 2 so I thought it was fitting that I could write up a blog between the two and share my thoughts on the pro’s and cons of each watch. So lets jump right in.

Lets start with ease of use: Both watches were fairly easy to setup with the phones via Bluetooth as they had easy walk through instructions that helped you get the watches setup in no time. My wife who’s not a Tech was able to get both of these watches to setup very easily herself.  Then as far as using the watch and configuring it to how you want to use it, both watches provide you with a variety of choices to setup.  Setting up a cool watch face and being able to buy more is very simple. The only difference is that Apple Watch Series 5 gives you the option to configure a watch face using your phone while the Samsung Galaxy Galaxy Watch Active 2 only allows you to change the face using your watch.  However Apple and Samsung both give you the ability to add/remove apps using both the watch and the phone app. Both watches for me ran pretty smooth and without much delay when using a Fitness Activity. This is a key feature that I’m sure most fitness folks will appreciate. The ‘Always On’ feature is available for both watches as well.  This always comes in handy when you\’re running or in the middle of a workout as it gives you the option to glance at your watch and check and see how much calories or distance your at. I remember using the Apple Watch Series 2 for a few years and having to tap my watch in order to see how much time and calories I’ve burned and when you’re out of breath and in the middle of staying focused in a workout, it could be pretty troublesome. One thing the Samsung watch is better on (At least at the time when I had the Apple Watch Series 5) is that it tracks my sleep much better then the Apple Watch Series 5 when I was using it last year in 2020. However it has been awhile and its possible Apple may have improved this, but when I switched to the Samsung Galaxy Watch Active 2, tracking my sleep became effortless. Overall the ease of use between both of these watches is fairly similar and I didn’t feel like it was too hard to make the switch from an Apple Watch to a Samsung Watch.

Lets get down to some technical specification comparisons. We’ll start with whats the same. Both watches are available in 40MM and 44MM so there is not much difference for options there except for the fact that Apple Watches are shaped as a square and Samsung Watches are shaped as a circle.  Both Smart Watches are able to survive underwater as deep as 50 meters and also able to utilize GPS and LTE technologies just the same.  They both come with an optical heart rate sensor along with also being able to utilize Apple Pay and Samsung pay respectively.

Now lets finish up with the real battle between both these watches. Which watch is better then the other as far as technical specifications?  So as far as price, Samsung wins this round as the Samsung Galaxy Watch Active 2 is available starting at $279 for GPS only version and $429 for the LTE version while the Apple Watch Series 5 (Now Series 6) is available for $399 for the GPS version and $499 for the LTE version. Also if we compare the Batteries, Samsung wins this next round with the Galaxy Watch as its able to handle 24-60 hours of battery life compared to the Apple Watches 18 hours of battery life. However the winning streak ends for Samsung when you start comparing thing such as display quality as the Apple Watch Series 5 has more pixels on screen for both its 40MM and 44MM versions compare to the Galaxy Watch Active 2. Also the Apple Watches have 8 times higher storage space with 32GB while the Galaxy Watch Active 2 only has 4GB of storage space for music and photos. The Apple Watch has a larger variety of colors to pick from compared to the Galaxy Active Watch 2, but for woman its key to note that Apple doesn’t have a pink Apple Watch while Samsung Galaxy Active 2 does have a Pink Gold option.

Also one more thing to conclude this watch comparison is that while both watches are both good at keeping track of running workouts pretty well utilizing their GPS features, the Apple Watch is far superior in tracking overall calories whether you are in a workout or not. There is a huge difference in my overall calories burned using the Samsung watch compared to when I had the Apple Watch. When I say ‘overall’ I mean my calories tracked throughout the day from my normal day to day activities. This is extremely noticeable when using my Samsung Galaxy Active Watch 2 for HIIT or weightlifting sessions. When I had the Apple Watch Series 5, one hour I was typically able to burn up 900 to 1100 calories during a HIIT session. My current Galaxy Active Watch 2 racks up just under 500 calories burned in an hour of doing a HIIT exercise. After researching this distinction, I found out that the Apple Watches base the calories more off of your heart rate through the workout or normal use while the Galaxy Active Watch 2 bases calories burned from the weight you set when you first setup the watch.

So its safe to say that the Apple Watch Series 5 (And now the Series 6) is the superior fitness watch over the Samsung Galaxy Watch Active 2. I\’m looking to see if Samsung will improve their watch to one day be on able to track HIIT and weight training sessions much better in the future.  I honestly would\’ve stuck with my Apple Watch Series 5 when I switched to a Samsung Phone, but  Apple does require you to have an Apple Iphone in order to use the Apple Watch devices as there is no Apple Watch support on the Ipad.  So for now I’m content with using my Galaxy Watch Active 2 in hopes Samsung improves their next watch to support better calorie tracking.  Hope this smartwatch comparison has been helpful.

Today is a special day because it's my wife's birthday. I want to wish a very Happy Birthday to my wife.
@spartantrail Incline Interval Training
LEG DAY HITS DIFFERENT ON MONDAY
My #fitnesstransformation
HOW TO START AND KEEP GOING 💪🔥
@spartantrail Morning Training 🏃‍♂️👟
WAKING UP WHEN YOU DON'T WANT TO 🥵😅💪
STAGE 3 STARTS NOW!!!!! @645program
POSTGAME MORNING CARDIO 🔥⚾️